While scientific research has not yet found a clear-cut answer to what causes schizophrenia, it has been consistently found that the brains of people with schizophrenia tend to be different from individuals without schizophrenia, including abnormalities in brain structure and brain chemistry. Research also supports that schizophrenia is caused by a combination of both genetic/biological factors and environmental factors. This is depicted in the diathesis-stress model of schizophrenia below, which suggests that an individual with a biological vulnerability who then experiences a major life stressor is at the greatest risk of developing schizophrenia. 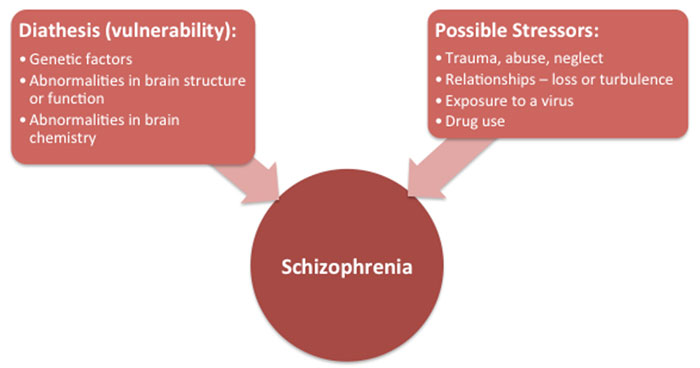 Schizophrenia is observed at approximately the same rate across cultures, with lifetime prevalence rates around 1%. Schizophrenia affects both men and women at approximately equal rates, though men typically begin to experience symptoms in their late teens or early twenties, while women tend to develop symptoms of the disease in their late twenties or early thirties.

There is no single laboratory measure or brain imaging test used for diagnosing schizophrenia. Rather, health care professionals use the criteria listed in the Diagnostic and Statistical Manual of Mental Disorders (DSM), which is currently in its 5th edition, for diagnostic purposes.

Diagnostic criteria for schizophrenia in the DSM-5:

B. Disruption in Daily Functioning (e.g., difficulty at work, in relationships, or with self-care).

C. Continuous signs of the disorder for at least 6 months, with at least 1 month of the symptoms described above.

D. Other similar disorders have been ruled out, such as depressive disorder or bipolar disorder.

E. The disturbance is NOT related to drug use, medication use, or another medical condition.

F. If the person has a history of autism, they must also have prominent delusions or hallucinations to be considered to have schizophrenia.

There is currently no cure for schizophrenia. The treatment plan should be tailored to each individual’s needs, given that the symptoms and course of illness vary on an individual basis. It is generally important to find the right medication to manage symptoms, with many different antipsychotic medications currently available on the market. However, the optimal treatment approach is generally one that combines both medication and psychosocial interventions, such as therapy or rehabilitation strategies involving work, school, and relationship goals. Family therapy may be used to improve family members’ knowledge of and coping with schizophrenia. Cognitive-behavioral therapy (CBT) may be helpful for some individuals, which includes developing coping strategies for dealing with symptoms and focusing on challenging firmly-held or negative beliefs. Notably, the majority of individuals with schizophrenia will experience repeated episodes of the illness throughout their life, even when receiving treatment. However, symptoms do tend to diminish with age, with the exception of cognitive deficits.