What is Frontotemporal Dementia?

Frontotemporal dementia (FTD) is a heterogeneous group of dementias characterized by relatively selective and progressive atrophy involving the frontal and temporal lobes of the brain. The individual may subsequently experience changes in behavior, language dysfunction and/or motor deficits.

It is the thought to be the third leading cause of dementia (after Alzheimer’s disease and dementia with Lewy bodies), accounting for approximately 10% of all dementias. Importantly, FTD is the second most common form of early-onset dementia, with approximately 70% of cases demonstrating symptoms prior to the age of 65. Symptom onset typically occurs in the sixth decade of life; however, symptoms may appear as early as one’s 30s to as late as their 90s. There is a strong genetic component to FTD, and it is inherited in approximately 1 of 3 cases.

There are three main syndromes defined by the most prominent and early features at presentation: 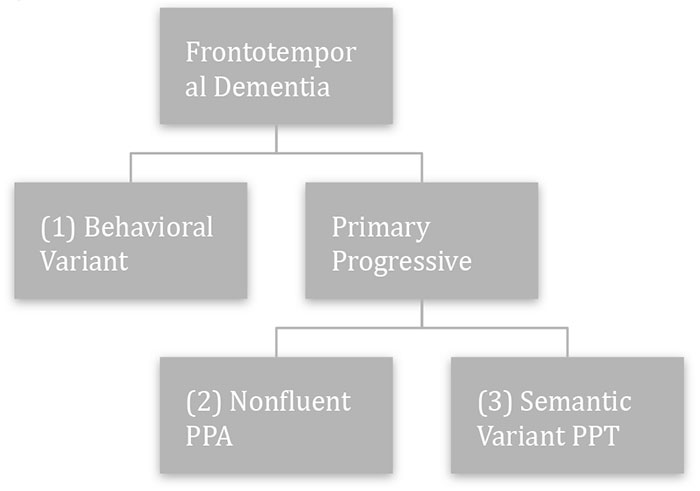 The most common presentation is the behavioral or frontal variant, which typically occurs between the ages of 40 and 65. It is estimated to account for 50-60% of FTD cases. Most notable is the progressive decline in one’s ability to control or alter their behavior in different social contexts. This may result in embarrassing or inappropriate social situations/interactions. The patient typically does not have insight into behavioral changes.

The semantic variant, also known as the temporal variant, is thought to account for ~20% of FTD cases. The most common problem is anomia (problem with naming). Other language abilities are generally spared early in the course of the disease. Therefore, individuals may actually be able to “talk around” the meaning of the word they cannot produce. However, the most characteristic feature is that, as the disease progresses, there is also a loss of meaning or knowledge for the words they are having difficulty producing due to a breakdown in semantic memory. Impairments can go beyond language and may therefore impact recognition of visual objects and/or familiar faces.

Progressive non-fluent aphasia is characterized by effortful and nonfluent speech. Nonfluent speech is the result of apraxia of speech and agrammatism.

Given the relatively earlier age of onset, there are some issues that may be particularly relevant for individuals with FTD and their families. For example,

Unfortunately, there are currently no therapies that alter the progression of FTD. As such, interventions are usually directed at managing current symptoms.

More information from The Association of Frontotemporal Degeneration

To Apply for Compassionate Allowances